Many months ago I received an email from MNZ notifying me about a women’s training camp to be held in Spain in October. I was excited at the prospect but knew it would be a small challenge for me to be able to attend and I wasn’t all that keen on travelling to Spain alone. In addition, I am not at all a fan of separating men from women in this sport as I believe it is one unique sport we can be equal in. So honestly I wasn’t sure what I was in for, but for the small 100 euro entry fee, I thought it would at least be a good chance to make some contacts and get some more track time.. Oh the surprise I was in for!!! The camp was to become so much more than just that and was definitely one of the best experiences of my life.

On Thursday last week I left Italy to fly to Valencia, took a rental car and arrived at Albacete excited for the weekend ahead. The prospect of getting a lot of track time the following day was looking slim at tis stage as it was absolutely bucketing down with rain and hail and reports were coming back to the hotel of the track being completely flooded.

Luckily Friday dawned new day and although overcast, the weather held out and we would be able to get out on track in the afternoon. In the morning we had some introductory sessions about the people there, track and bikes (bmw s1000rs supplied by bmw). It was pretty difficult to concentrate during these theory sessions because this event was also the FIM European road race championships – a one off European title race for moto3, 600cc stock and 100c stock – so there were bikes constantly zooming past and all I wanted was to be out there on track too!

Eventually our turn came and we did the first part of the session in a follow the leader type format. It was a good way to learn the track and get used to the bike (and road pattern ear shift!) and after this we were allowed back on track for two sessions to do whatever we liked. I found the bike incredibly agile and small for a superbike (I could even nearly touch the round!) and obviously being 1000cc, it had a lot of power. In the second turn I asked coach Ismael Bonilla to ride with me because although I surprised even myself by adapting so quickly, I didn’t have a good feeling in one particular corner. I went out behind him and as he got faster and faster I kept following close behind to learn all I could. When Ismael waved me past I continued riding the best I could and using what he taught me. At the end of the session he came to me with the biggest smile on his face and said “do you really know how fast you are?? That was unbelievable for your first time on this circuit” One of the organisers later told me Ismael had said to her he was afraid he was going to crash trying to keep up with me! He was truly mind blown, not only at me but with the level of all the girls out there. And I have to agree with him.. These chicks are FAST!!

This fact became even more apparent to me on Saturday morning as it took me a few laps to get back into the same rhythm of the previous day. On these laps I was being passed left right and centre! Being a racer I definitely don’t like being passed, and decided to get my act together, but it was a fun challenge trying to go as fast as I could and being able to compare my speed to the other girls.

On Saturday we also had the company of Katja Poensgen, who previously raced in the 250 gp world championships, and Ana Carrasco who races in world moto3 currently. I found Ana super inspiring as she spoke with maturity well beyond her 16 years about racing together wit the men. Other notable ladies in attendance were road racer Maria Costello MBE and Daytona winner Melissa Paris – who is also my good friend. These girls were amazing, along with all the other riders in the camp. They were down to earth, really hard working and, I will say it again, fast!!

On Sunday we only got one hour on track and despite being a bit tired from the previous days, it was once again a lot of fun. It was just so awesome playing around with that much power! I was sad for the weekend to come to an end. The organisation of the camp was awesome; the FIM staff were so friendly and helpful in every way.  As an outcome of this camp there is likely to be European women’s championship held next year. I can’t wait to see this event row in the future. I hope we can organise to get some kiwi and Australian girls there too.

Thank you once again to the FIM, FIM women’s commission, Anne-Laure, Nita, Isamel, bmw and the circuit of Albacete for tis amazing opportunity. Also thanks to my existing sponsors and my family (especially mum!) for making it possible for me to attend. I look forward to more collaboration with the FIM women’s commission in the near future! 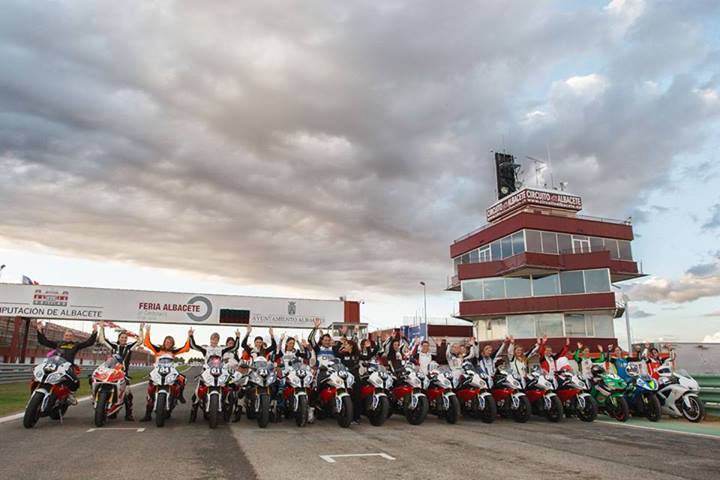